10/28 News: TFP Stands in Solidarity with TWU & How Riders Can Prepare for a Possible Strike

SEPTA officials on Friday announced that a tentative agreement has been reached between the  Transport Workers Union Local 234 and the transit agency on a new two-year contract, narrowly avoiding a strike authorized by union members last week

As reported by Maria Pulcinella and Aaron Moselle of WHYY, "The proposed contract includes yearly wage increases of three percent. TWU Local 234 members also will receive a pandemic hazard bonus of $1 for each hour worked between March 15, 2020, and March 15, 2021, to a maximum of $2,200.

We at Transit Forward Philadelphia are pleased that both parties were able to come to an agreement and that a potential strike was avoided. We firmly believe that the TWU's requests were reasonable and in line with the treatment of transit workers across comparable agencies in the Northeast. 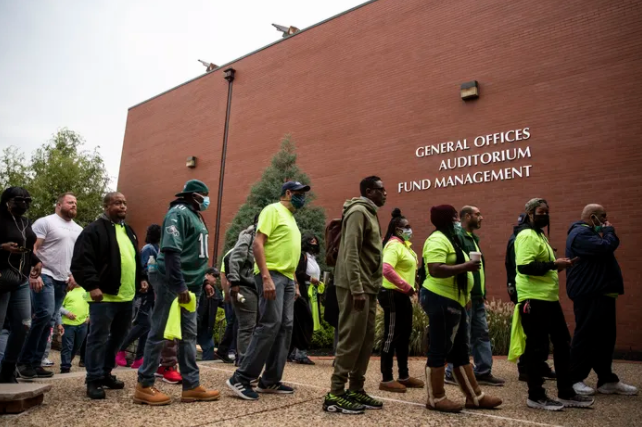 On October 24, SEPTA’s transit workers voted to authorize a strike if the negotiations on a new contract break down. If SEPTA management fails to make a deal, the current agreement will expire on November 1 and SEPTA’s largest union, the Transit Workers Union Local 234, will go on strike. The Local 234 represents the workers who operate the buses, trolleys, subways, and elevated lines, as well as mechanics and cashiers, within Philadelphia. If the workers go on strike, all of these services would be suspended until a new contract is reached.

Transit Forward Philadelphia stands with these workers and supports their position. SEPTA workers’ requests are reasonable and in line with the treatment of transit workers at other comparable agencies, yet SEPTA management keeps dragging its feet. Throughout the pandemic, SEPTA workers have been essential, taking on high risks to continue providing public transport. Without them, other essential workers would have been unable to get to work, and we would have faced a shortage in healthcare, food service, and emergency response. Continuing their duties during the pandemic resulted in over 800 SEPTA workers contracting COVID, and eleven died of the virus. While the families of the eleven workers who died received fruit baskets, the families of New York transit workers got $500,000 in survivor benefits. Meanwhile, SEPTA workers are the lowest paid in the region, and have no guaranteed parental leave. The union is asking for a pay raise, hazard pay for working during a pandemic, and paid parental leave. The union is not making unrealistic demands: they are asking to be treated like their peers across the Northeast.

If SEPTA management fails to prevent a strike, the entire system will not shut down. Suburban services are represented by a different union, so regional rail, suburban buses, the Norristown High Speed Line, and suburban trolley routes will still be operational. SEPTA has even announced that it will be running additional regional rail service for the duration of the strike. Additionally, LUCY routes (Loop through University City) and CCT Connect will still be running. SEPTA has a complete guide on their website to help riders navigate transit service during the strike.

Unfortunately, even with these services continuing to run, there will be enormous coverage gaps in the network. The Bicycle Coalition of Greater Philadelphia is preparing people to “bike the strike” if they lose access to transit. If you don’t bike regularly, the first thing you should do is make sure that your bike is in good condition! That means knowing your ABCs: Air, Brakes, Chain. You don’t want to jump on a bicycle if the tires aren’t full of air, if the brakes don’t work, or if the chain is either loose or broken. If you have a problem you can’t fix on your own, be sure to take your bike to a bike shop. For people who don’t have their own bike, Indego bike share stations allow you to get around town without having to purchase one. It’s also important to make sure that you know the quickest, quietest, safest way to reach your destination. Find a neighbor or local friend who you can ride with. A riding partner can help you with your bearings and get you on a path of least resistance to wherever you need to go. If you don’t know anyone nearby you can ride with, check out the Bicycle Coalition’s bike maps page and set a route on your own. The Coalition also has a library of rides throughout the region via their Ride with GPS benefit. You can even use Google Maps to give you directions, but this doesn’t necessarily provide the easiest ride, and the Bicycle Coalition recommends it only after other options are tried. You can take a look at the Bicycle Coalition’s complete guide to biking the strike here.