Chestnut Hill West and the Future of Regional Rail

While the pandemic has put many in-person activities on hold, for many frontline and essential workers as well as already vulnerable communities, the need to commute to in-person jobs, classes, appointments, and shopping trips never went away. My name is Megan Kerstein and I’m a Philadelphia medical student who has been involved with Transit Forward Philly since November 2021. In August of 2020 I had to move across the country to Philadelphia to begin medical school. Before the start of the pandemic, I chose to live in a neighborhood with a quick SEPTA Regional Rail commute on the Chestnut Hill West (CHW) line to campus, as I had been a lifelong transit rider and had never owned a car. Upon arriving in Philadelphia I learned that SEPTA had temporarily suspended the Chestnut Hill West line, severing the connection between school, jobs, appointments, and essential shopping trips for many. While the CHW line was suspended, the SEPTA 23 bus, which travels from Center City to Chestnut Hill and roughly parallels the CHW line, took over much of the passenger volume from the shuttered regional rail line. This led to overcrowded buses during the height of the pandemic, putting passengers and transit operators simultaneously at higher risk of contracting COVID-19. The Philly Transit Riders Union, a grassroots organization and coalition member of Transit Forward Philadelphia that advocates for the needs of SEPTA riders, surveyed riders about the overcrowding of the 23 bus and other bus routes. Riders sent pictures of crowded buses, and others reported the difficulties of getting around with the limited frequency of service throughout the pandemic. 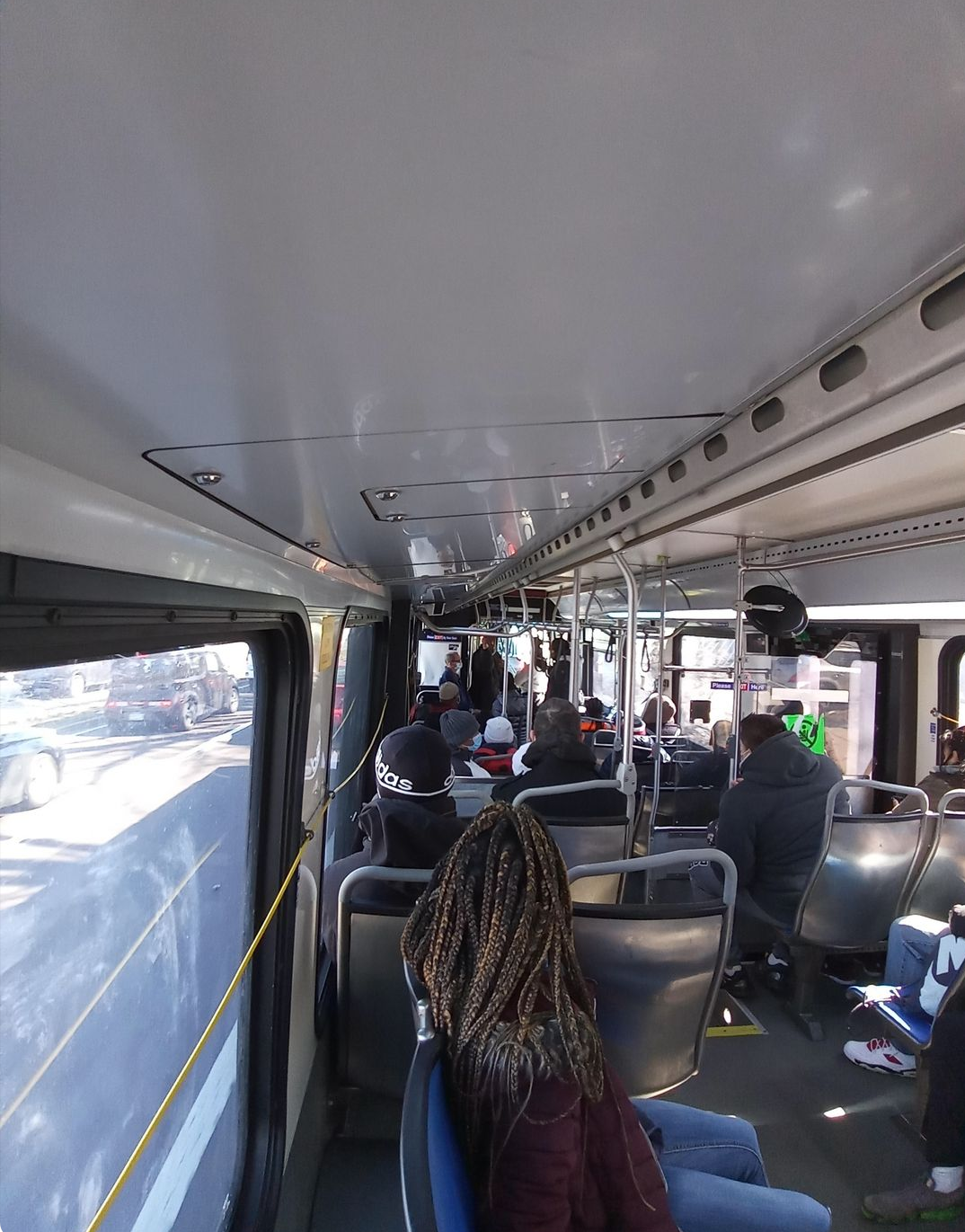 Overcrowding on the 23 Bus (Photo Courtesy of PhillyTRU)

During the pandemic, SEPTA and many other transit agencies faced drastic declines in ridership and thus fare revenue. In response, the transit organizations cut service substantially, further decreasing ridership since transit service fails to provide frequent, reliable service to meet riders’ needs. This is known as the “transit death spiral,” making it harder for transit agencies to recover and properly maintain their transit fleets and add back service.

For many essential workers, their commute times drastically increased because of the reduction in SEPTA service. One commuter, Miguel Garcia, was interviewed by the Philadelphia Inquirer and stated that his commute time went from an hour-and-a half up to two-and-a-half to three hours each way due to the service cuts. Traveling one way to work, Mr. Garcia would take two buses as well as the Market-Frankford and Broad Street Line to get there, further increasing his risk of exposure to COVID-19. In fact, one study by Wharton and Independence Blue Cross showed that essential workers in the Philadelphia area had a 55% greater risk of testing positive for COVID-19 than those who were able to work from home. Essential workers in Philadelphia were also more likely to be people of color and live in neighborhoods where a higher proportion of residents live below the poverty line than non-essential workers. This exacerbated the stark inequalities the pandemic highlighted.

In March 2021, SEPTA reopened the Chestnut Hill West line with limited weekday service and no weekend service. While this was a step forward, it still created problems for riders relying on the route, particularly those who use transit service outside of rush hour. For instance, the last train in the morning departing Chestnut Hill would leave at 9:51 AM and then the next Center-City-bound train would not leave until 1:51 PM. Even with the restoration of the Chestnut Hill West line, these large gaps in service left transit riders with few alternatives outside of taking crowded buses, such as the 23.

SEPTA’s recent December schedule update restored Regional Rail service back to 75% of pre-pandemic levels. The Chestnut Hill West line saw weekday hourly service added as well as weekend service restored, making it easier for transit riders to get around during off-peak hours. From April 8, 2020 when the Chestnut Hill West line shut down to December 19, 2021 when the service was largely restored, transit riders faced great challenges getting around Philadelphia while also staying safe during the pandemic. While the pandemic is still far from over and inequalities persist, SEPTA’s increase in service is a much-needed step in the right direction. Given the overcrowding and excessive commutes that disproportionately put marginalized communities at risk, SEPTA should reconsider whether service cuts truly prevent the spread of COVID-19 and keep commuters safe.

In order to prevent service cuts that have such a profound effect on many Philadelphians and add service back to crucial levels, SEPTA can look to projects, such as the SEPTA Bus Revolution and Reimagining Regional Rail. The SEPTA Bus Revolution is a project started in 2020 that encourages input from community members to simplify bus routes, increase the reliability of bus service, rework transit routes to better reach job centers that may have shifted during the pandemic as well as better allowing people to use transit for non-job related transit such as getting to appointments and leisure activities. The Bus Revolution has conducted several studies to determine gaps in transit coverage, SEPTA strengths and weaknesses, and analysis of different SEPTA bus routes to see areas for improvement. By 2023, the Bus Revolution seeks to start making changes to the SEPTA bus system to improve routes and service, increase transit equity, and best meet the needs of riders across Philadelphia. SEPTA can work together with the Bus Revolution project to ensure that transit service in Philadelphia is accessible, reliable, and can be used by all, acutely reducing the inequities exacerbated by the pandemic.